Just announced April 18th!  Crimson Secret, my novel set during the War of the Roses, won the bronze award in the Best eBook Romance category! 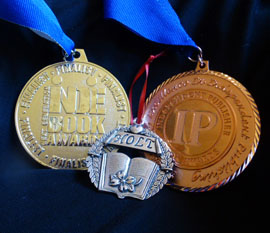 Australia/New Zealand, and Europe.
I haven’t received the award yet, but it looks like the larger award to the right in the photo.
Thanks to my critique friends, my beta readers, editors, and my cover designer and daughter, Jalena Penaligon!